Map and counter program for RPG. 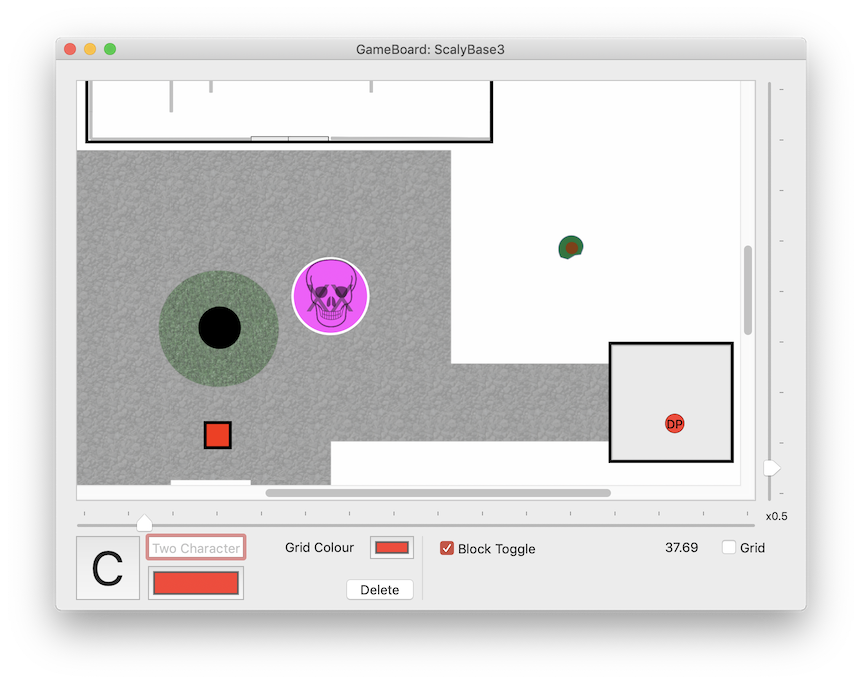 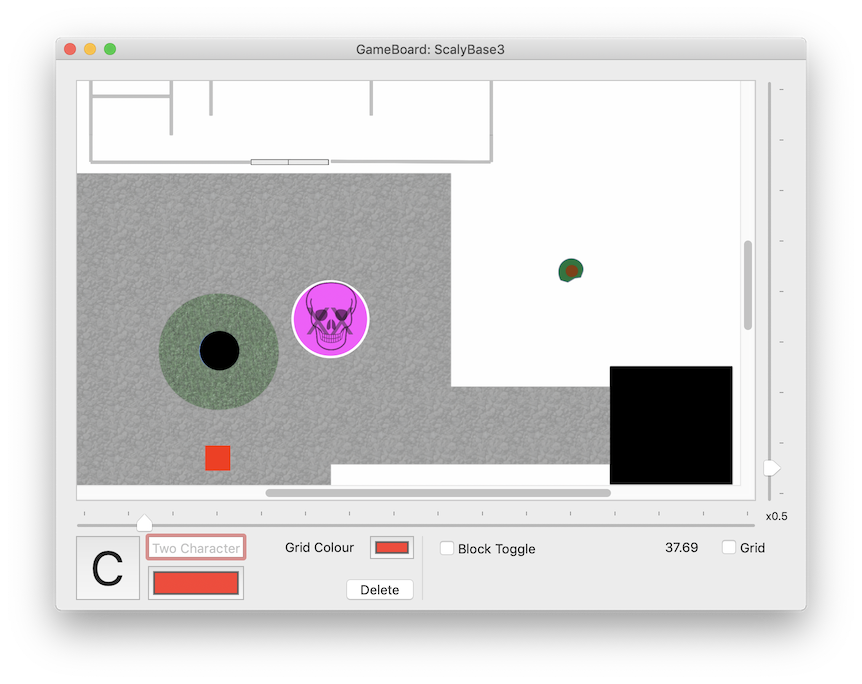 Bottom image is with 'Block Toggle' off. The blocks are opaque or invisible. 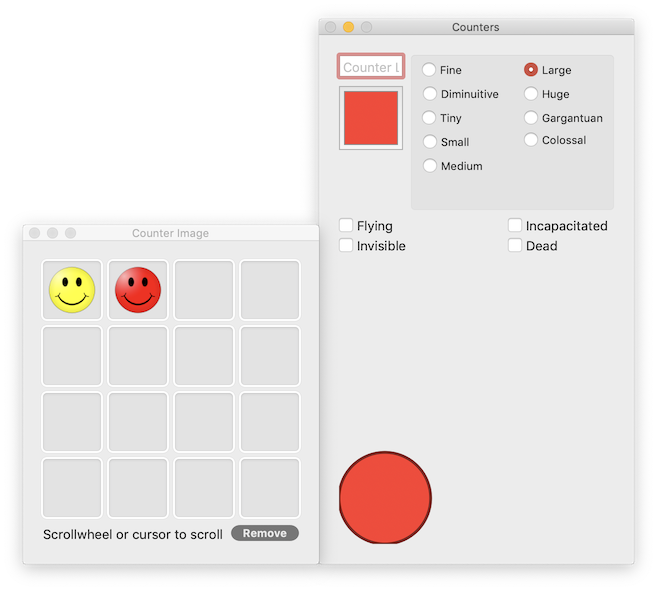 The currently selected counter's attributes will be shown here.

The currently selected counter can have its image set by clicking on any image. The 'Remove' button clears the image. If the counter image window is closed, double-click the counter display in the 'Counters' window.

Below is the counter image management window. Use this window to import and delete images. Maximum image size is 1024x1024. 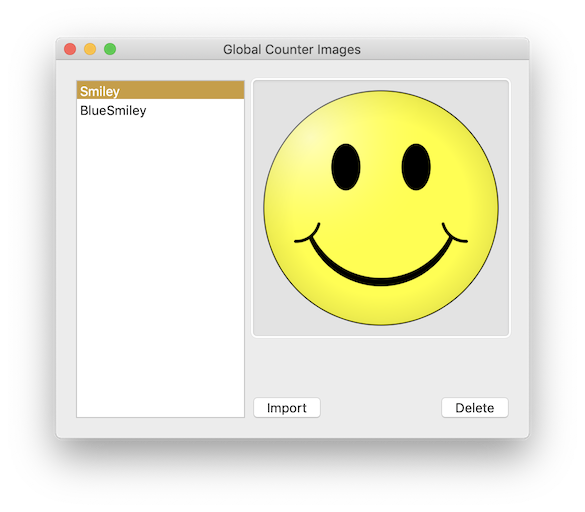 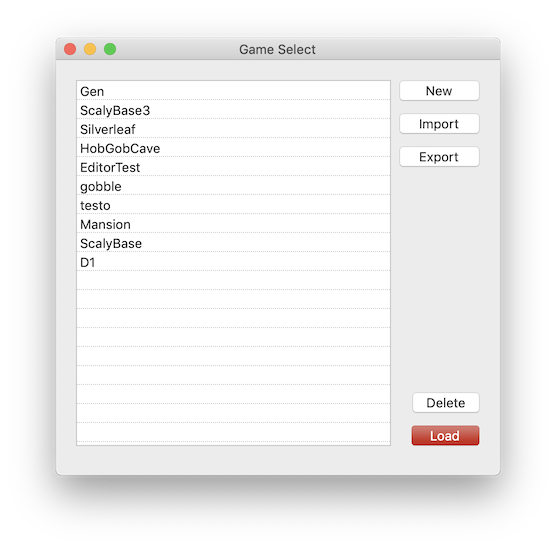 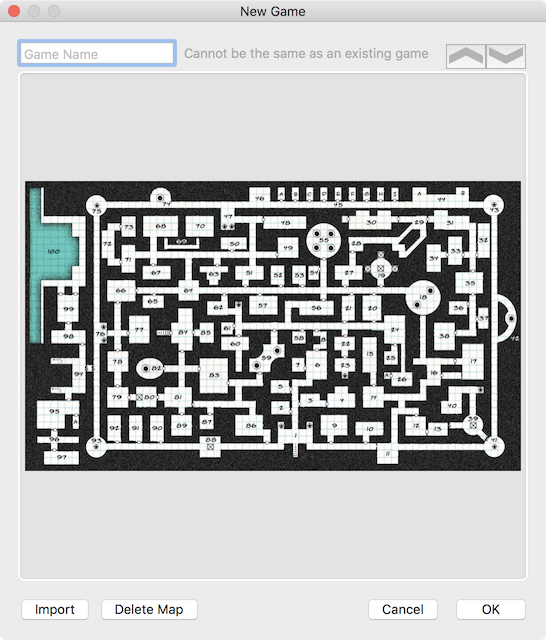 Creating a new game still functions as in version 1, there will simply be no blocks present. 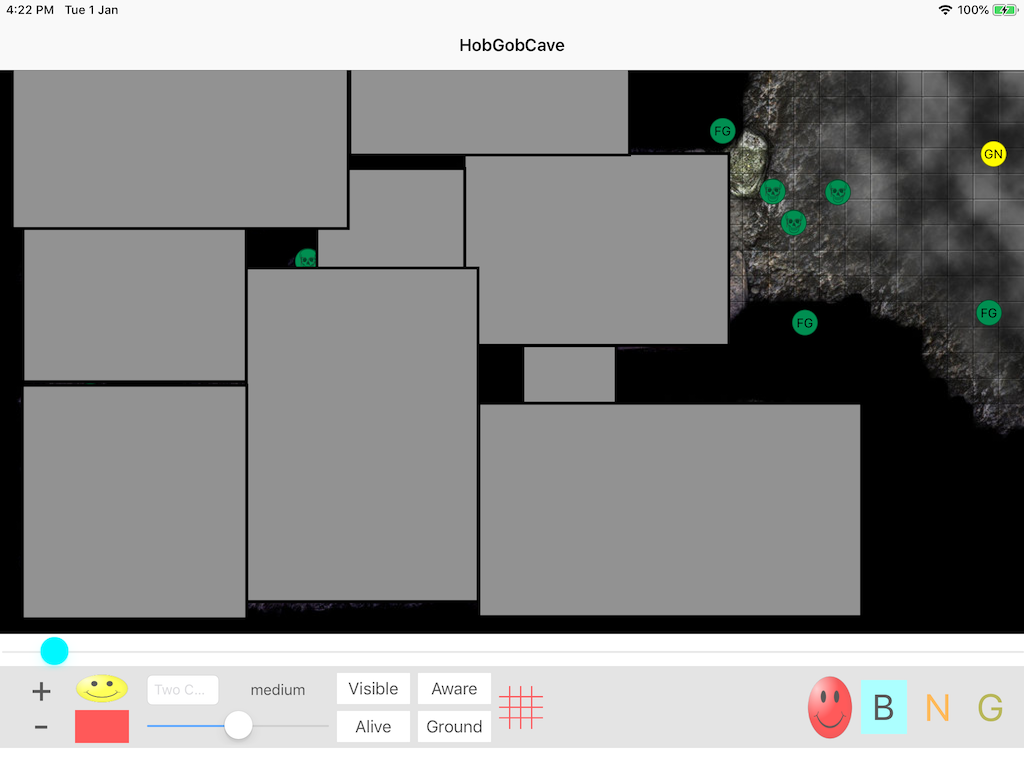 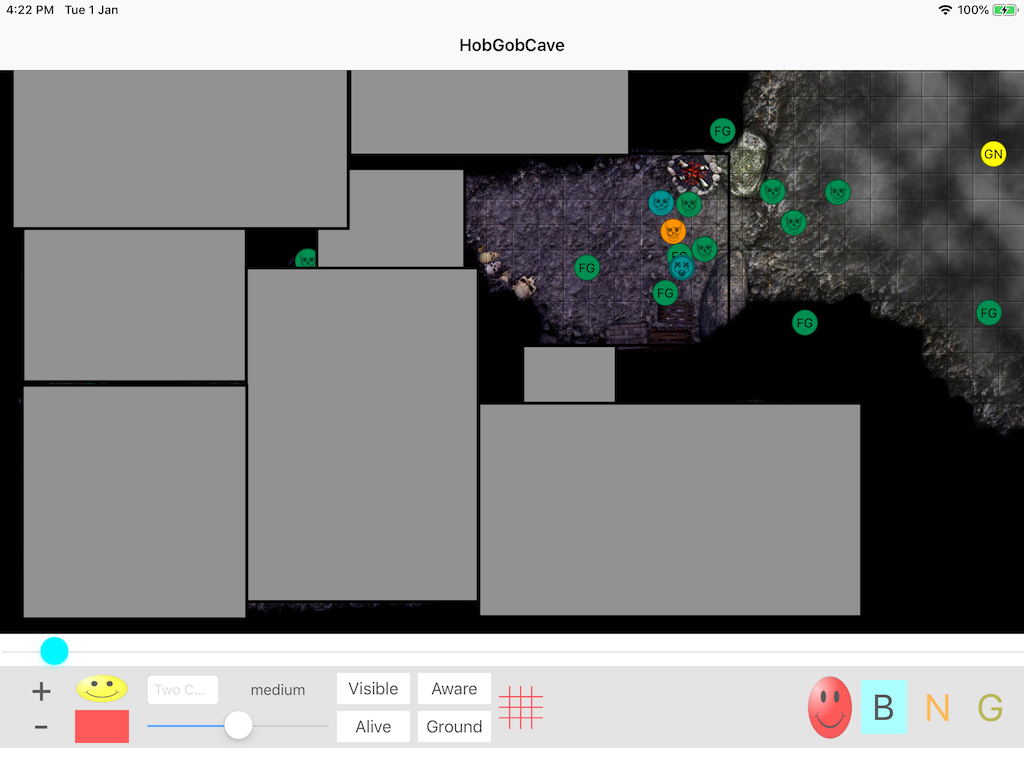 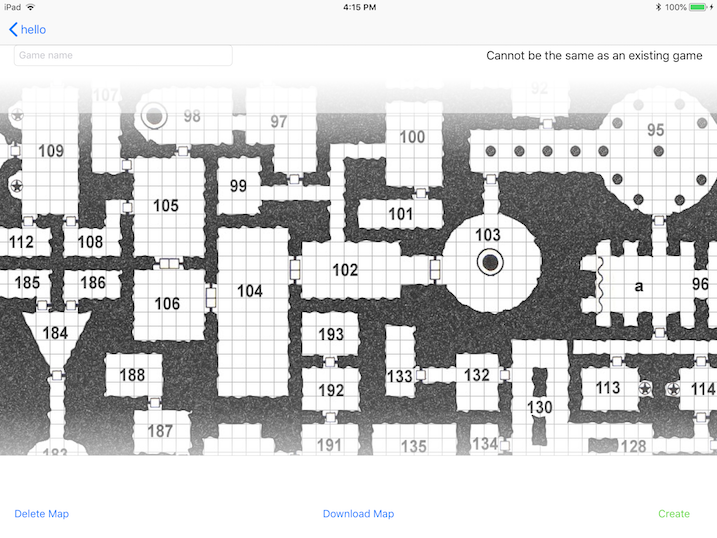 Important Maximum image size is restricted to 4000x4000, this includes user zooming via pinch gesture. Anymore could cause the operating system to kill Gameboard due to memory issues. Gameboard will not import images larger than this.

When an image is imported via File Sharing, it is moved to an internal directory approximately 10 seconds after Gameboard launches (it checks every 10 seconds for new images). To check if it is actually present, go to the 'New Game' screen and scroll through the maps.

If an image is successfully downloaded, it will do validity checks, and if successful, copy it to internal storage. Downloaded images are then deleted, whether or not it was copied.

To use bundles created by the game editor, you add them via iTunes file sharing. The bundle will have the 'gbfb2' extension. Gameboard client will move the bundle to internal storage. The newly added game bundle will be visible in the 'Game Select' screen. 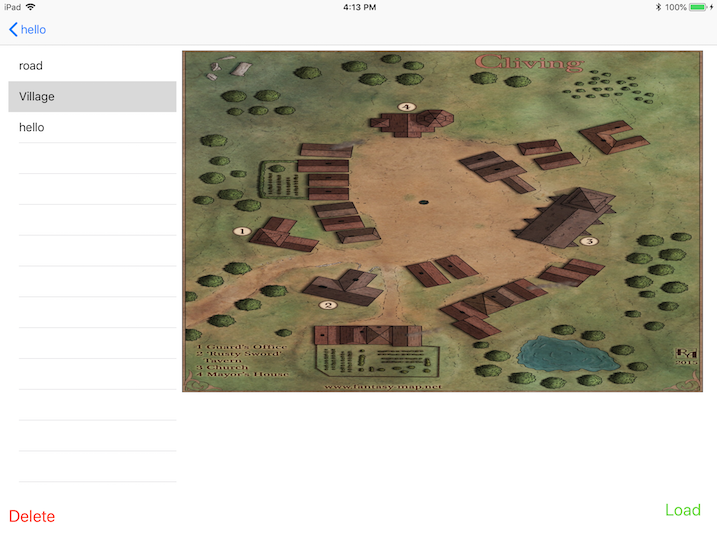 Nothing not obvious. Select a game and load it. 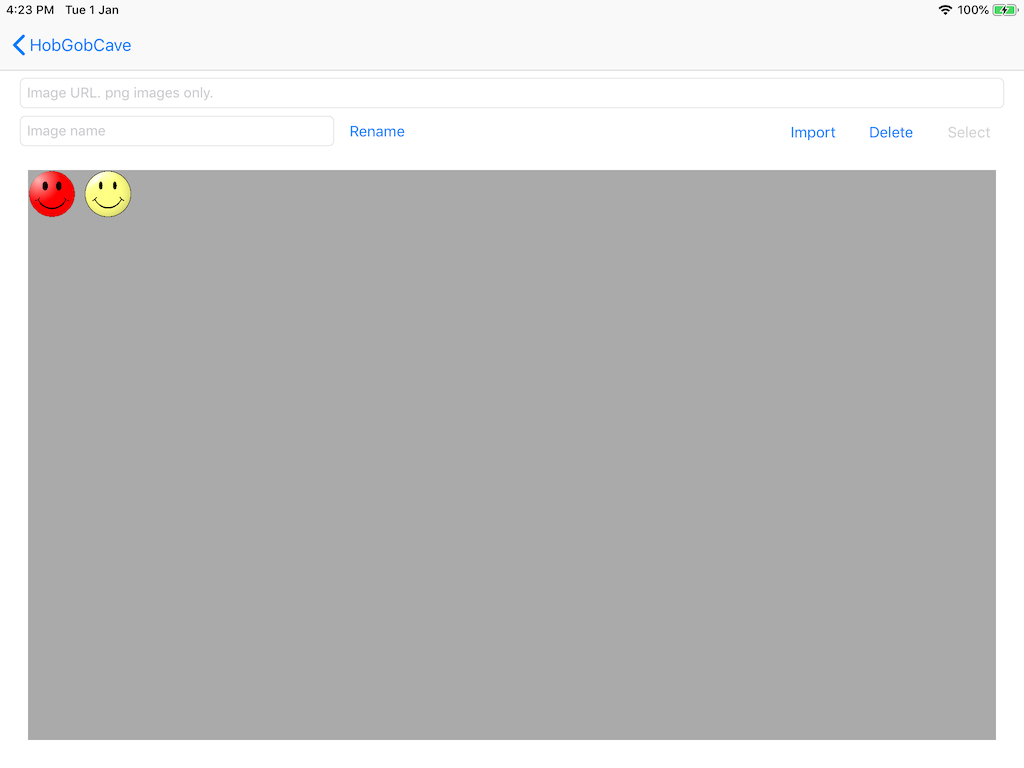 The image above shows the screen in management mode.

Import will attempt to download the image with a user entered URL (see image download above). The URL must be 'https' and the image must be 'png', 'jpg' or 'gif'. A coloured box will appear next to the import button indicating one of the following:

Images can be renamed, but doing so will result in any counter using such image to lose it. You will have to reselect the image again for the counter. Rename failure will result in a yellow flash.

In select mode, the 'Select' button will be enabled, the 'Delete' button will be renamed to 'No Icon' and all the other buttons and text fields will be disabled. If a counter is selected, you change its image by touching one of the images or pressing 'No Icon'.

You can import counter images via iTunes file sharing. So the game does not confuse these images for maps, the counter image file name must start with 'CI_'. So your green smiley is named 'Green.png'. To import it, you rename it to 'CI_Green.png' and import it into iTunes. GameBoard will find it and import it provided it is a png file and its dimensions are not greater than 1024. Gameboard will rename the image back to 'Green.png'.

You will be taken back to the main screen.

You will be taken back to main screen.

All ready to use.

Images can be added via iTunes file sharing.

For those who want to edit the bundle files directly, I have no issue with you doing so but I am not liable for any mishaps that occur. The important detail is that all text file line endings are unix (\n, 10), not Windows (\r\n. 13,10). Only use an editor which can save the correct line ending otherwise the bundle will probably be flagged as corrupted and not load.