SpellList is a utility app which lists spells from the Pathfinder® RPG with a semi-natural language filter. This is a ground up rewrite of version 1 with significant improvements. Version 1 information is here.

An iPad version will be coming eventually.

The application has three major parts.

This application assumes you are familiar with the Pathfinder RPG rules. It is not a teaching guide. 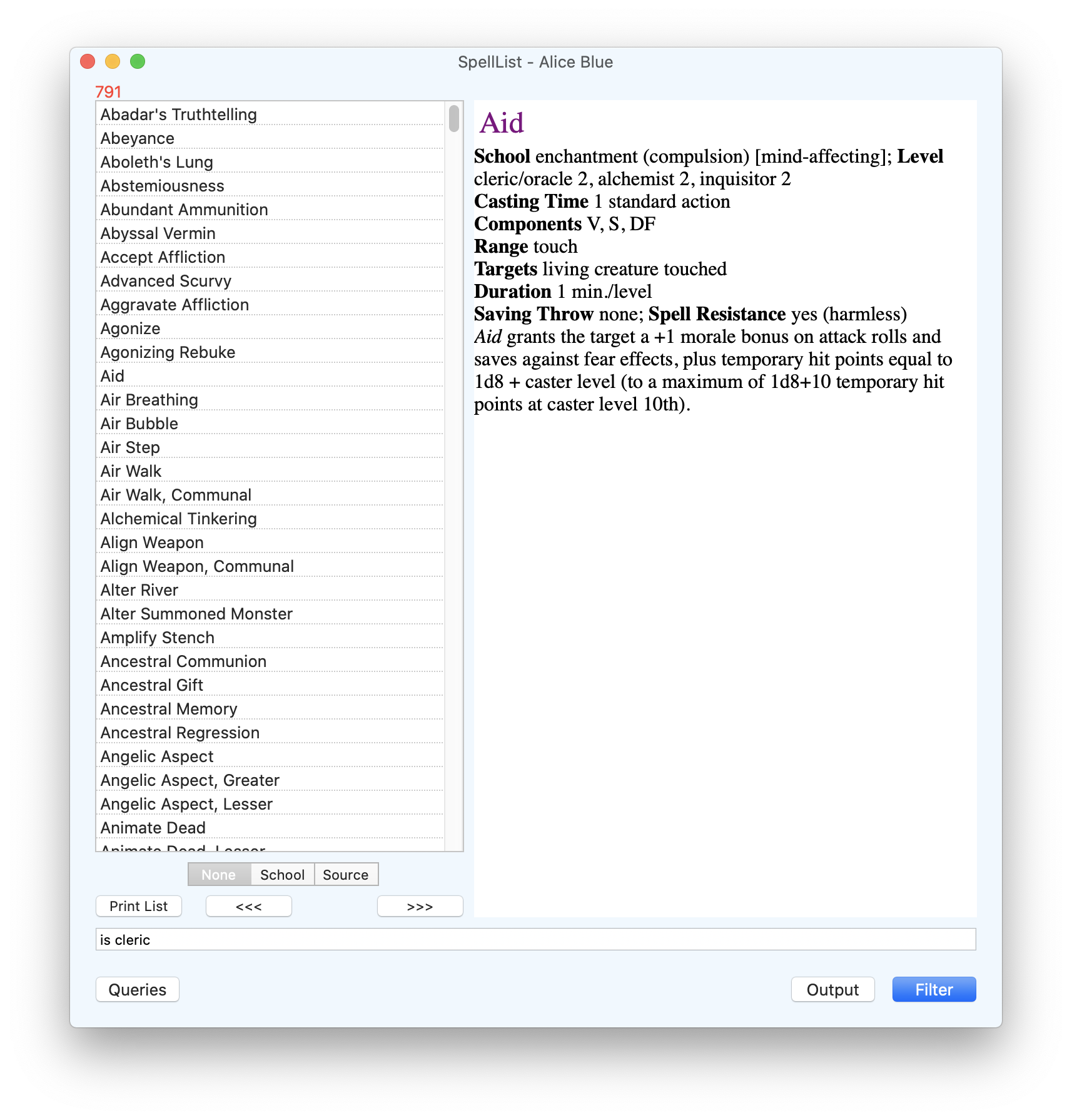 You can open up to twelve of these windows via ⌘N. Each window will have a different background colour. The reason for this is so you know which window the Print Window and the Query Select window is associated with.

How to create a query is explained in the appendix and also in the Query Editor window. 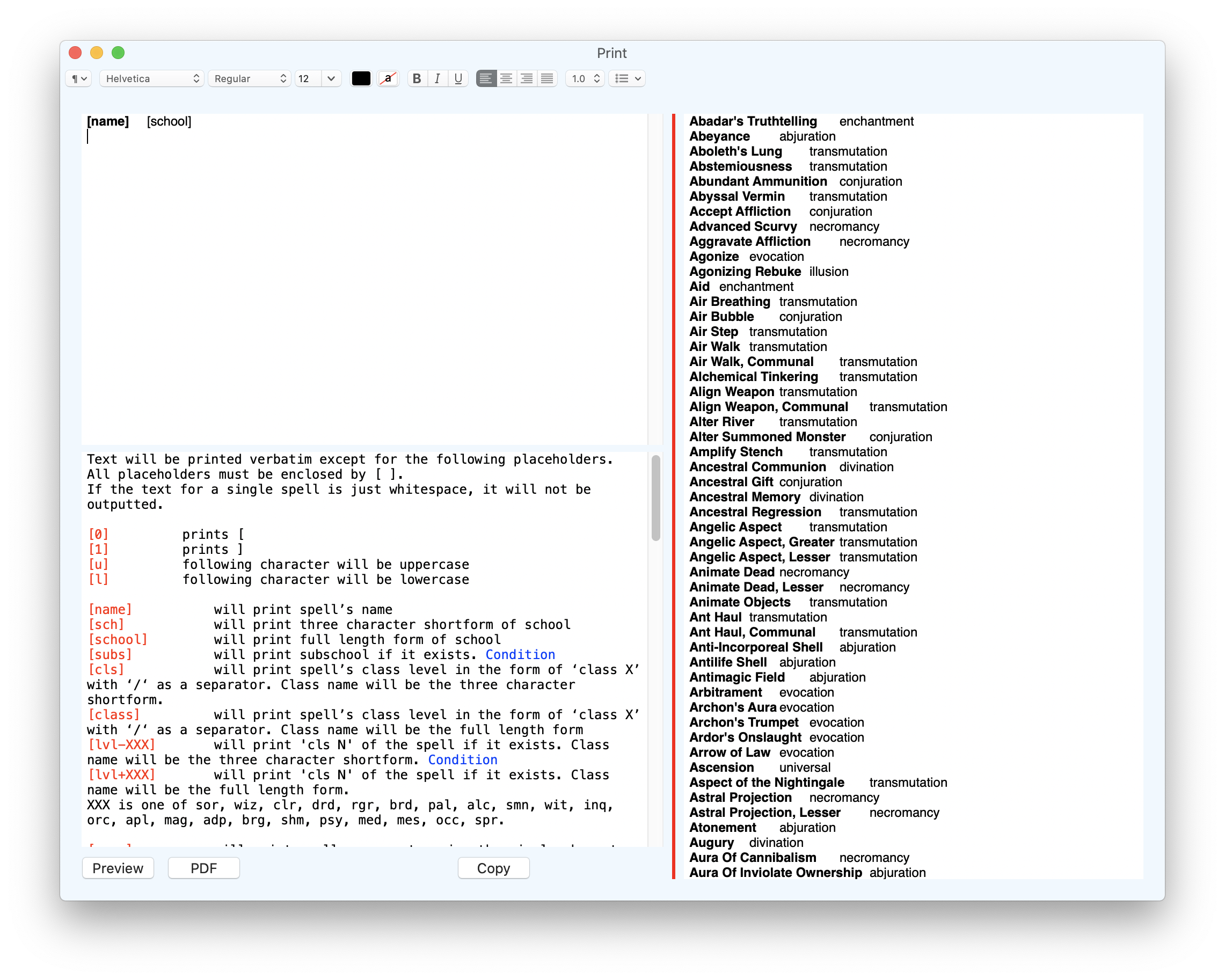 The Print Window's background will be the same as the associated Spell List window.

Each spell will have the formatter applied to it. Formatter details are below.

Preview will display the output in the right hand pane. Copy will copy all formatted spells to the clipboard in the RTF format. This application is not a word processor, use TextEdit or a dedicated word processor for decent editing and printing.

PDF will open the PDF Window (detailed below). 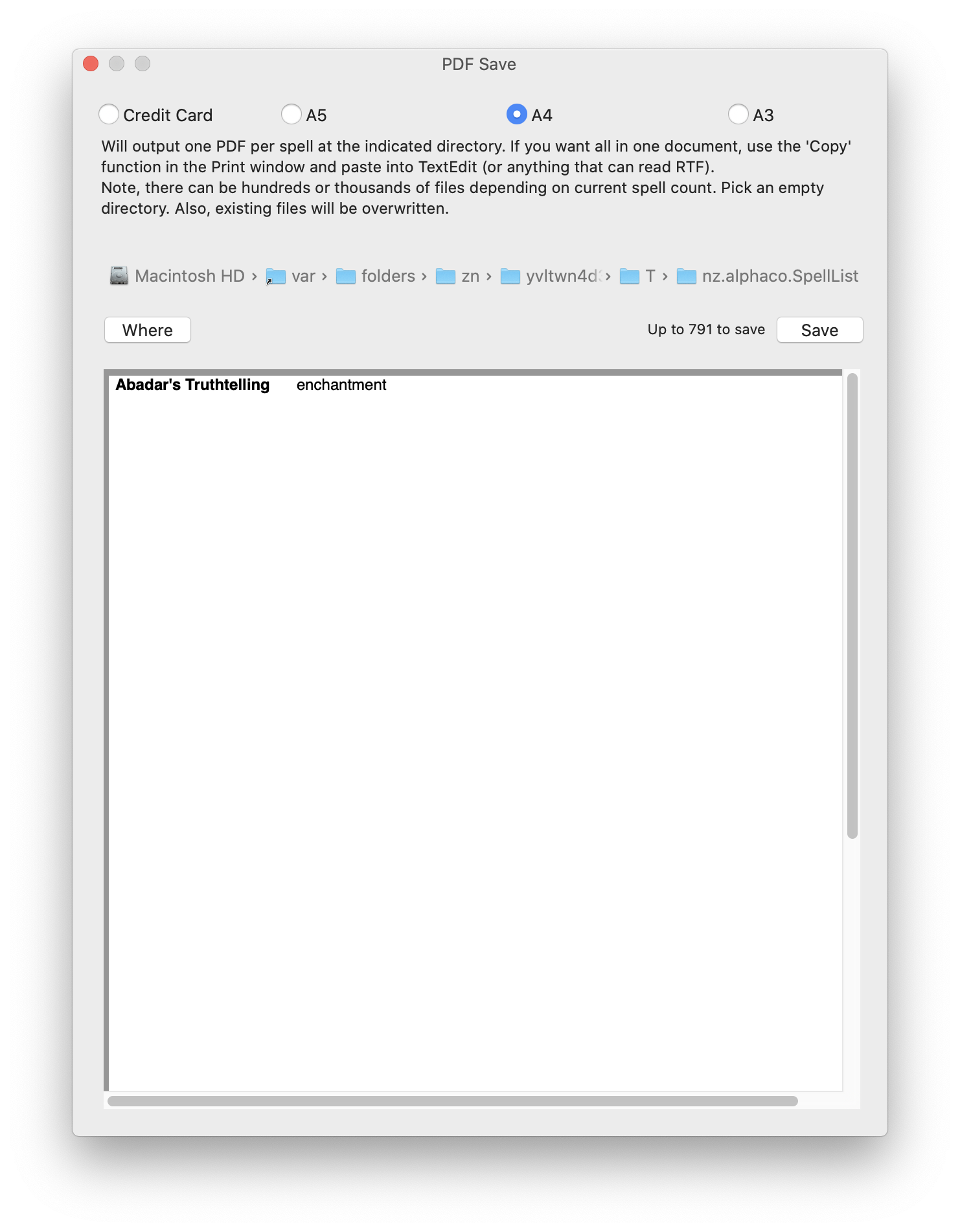 This window is for outputting formatted spells as a PDF file with one spell per file. Existing files will be overwritten.

Pick a destination location and press save. Hundreds or thousands of individual files will be saved to the directory. The preview view will display the first spell in the filtered list. 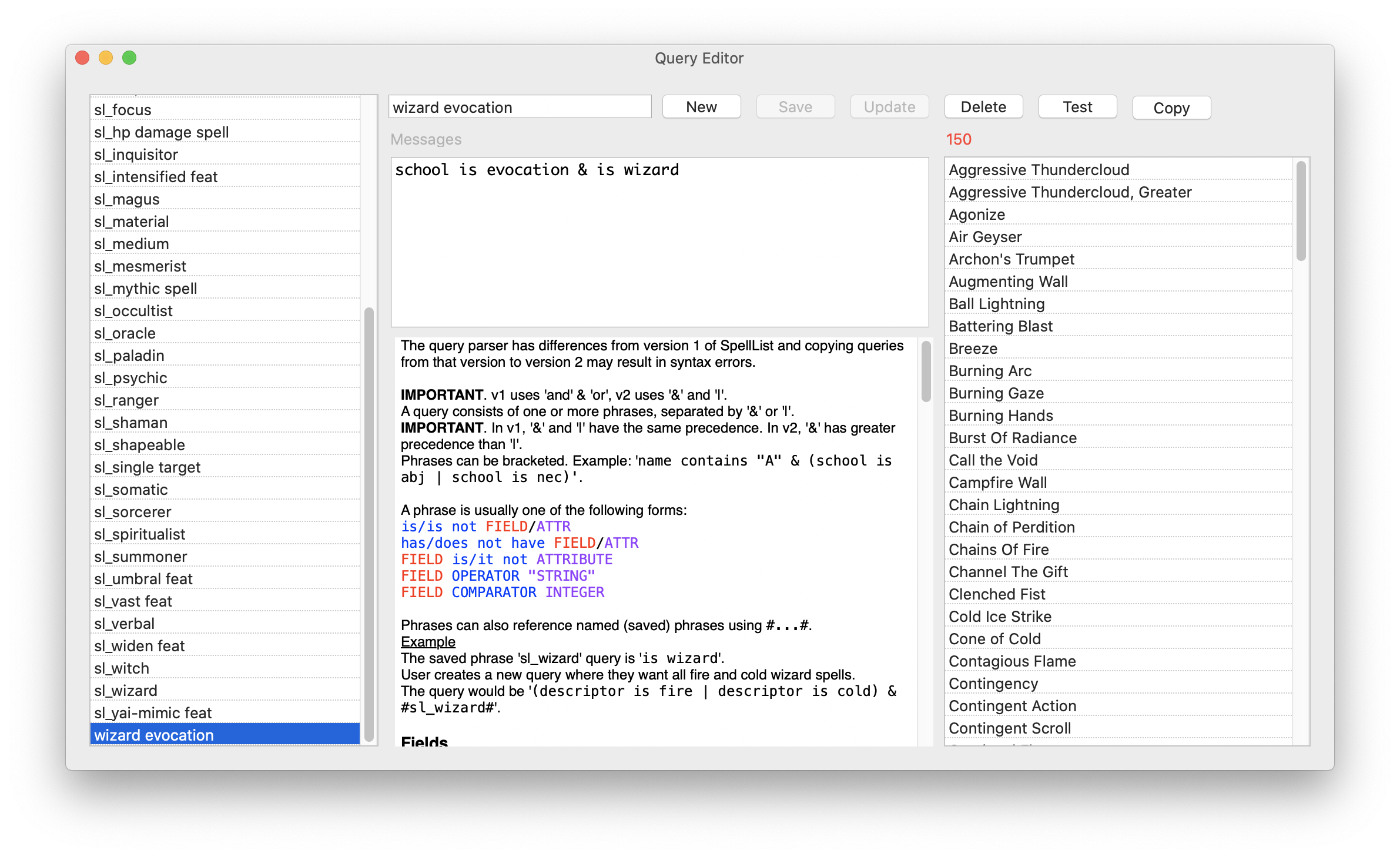 This is where queries are managed.

The query language is a very simple, semi-natural language. The SpellList Window filter uses the same language. It can access the saved queries by entering #<query name># in the text entry.

The 'sl_' prefix for query names are reserved by the application.

When editing a query, the text colour will be black, red, purple or blue.

Everything is converted to lowercase when saved.

Test will test the query and list all spells which pass the query.

Copy is for convenience. Copies all names to the clipboard.

Details of the language are in the appendix. 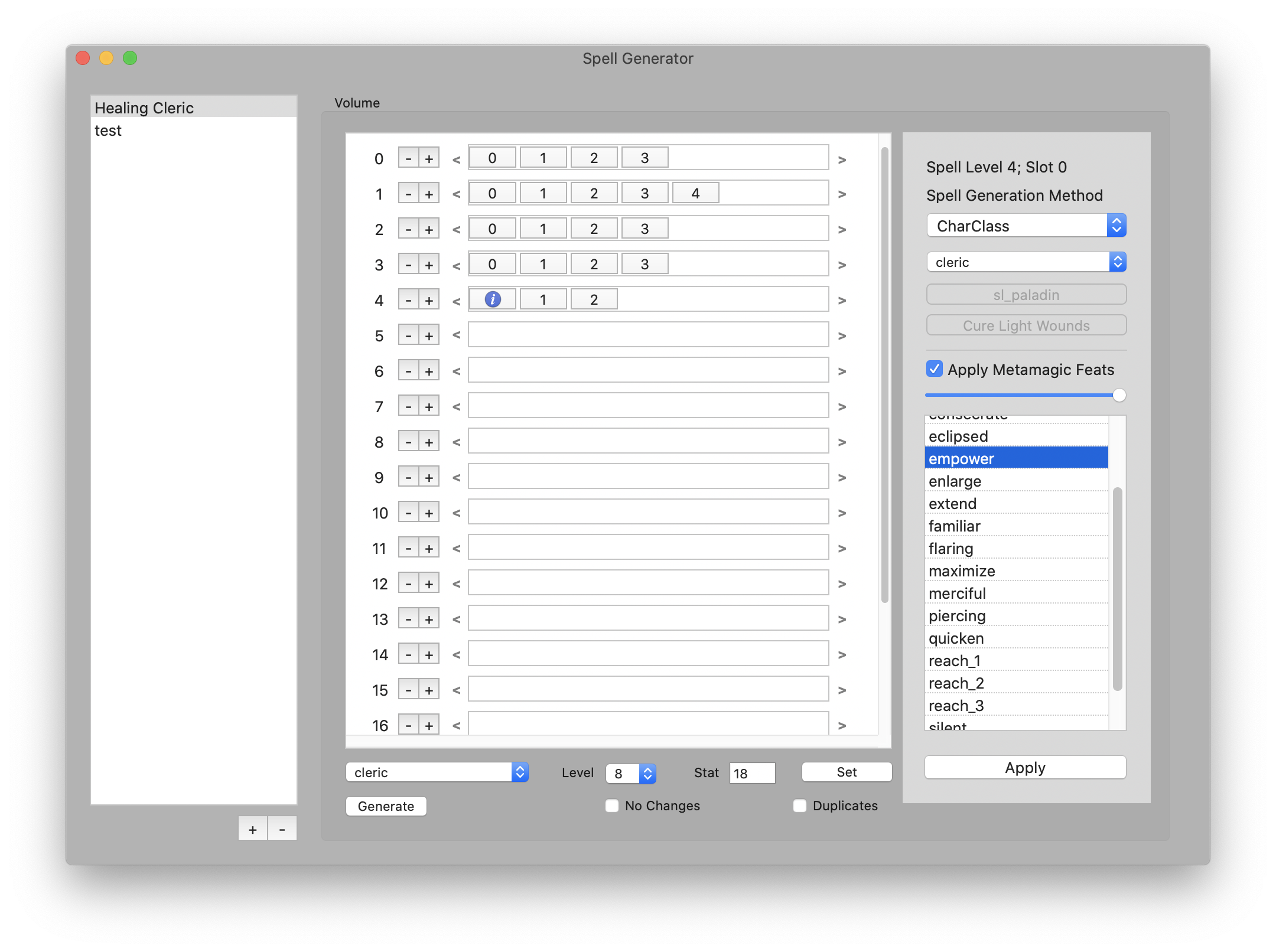 This is the semi-random (user guided) spell generator.

A completely random generator is easy to create. But it is impractical for encounters: a wizard is not going to memorise fire spells for a Red Dragon.

So what this is is a Spell Volume editor. Each volume has X number of spell slots for each spell level. Each spell slot has a spell selection method. The selection method narrows the available spells for the randomiser to select.

Spell volumes are auto saved whenever it is deselected or when SpellList quits.

Changes are not reversible, neither are deletions.

Under the hood a Volume is XML file. Do not edit it, if a Volume is corrupted, it will not be loaded.

Each spell level can have, in theory, an infinite number of slots. Practically speaking, doing so will cause performance issues and crashes. There is no enforced limit so use some common sense.

Any slot with the

  symbol is the current slot being edited (right-hand column).

The class popup menu, level popup menu and stat text editor are convenience setters. Pressing Set will clear all slots and set it to the standard class slot count (including high stat modifiers). The stat is ignored for classes of the sorcerer style casting. All slots will have the specified class as the default spell selector.

No Changes check box, if checked, will prevent slot count changes. It does not prevent individual slot editing.

Generate generates the random spell list. The list will open a window shown below. Duplicates checkbox indicates whether or not duplicate spells are allowed. For sorcerer style casting, this is ignored.

Sometimes during generation, <no spell> will appear. This can occur if the slot generation method produces too few spells for selection or none at all.

For example, spell level 3 - slot 0 has the Quicken metamagic feat with 100% chance. This will always produce <no spell> as Quicken spell has a +4 spell level modifier.

The generator makes forty attempts at filling a slot with a spell, if that fails, it will tag it as empty. 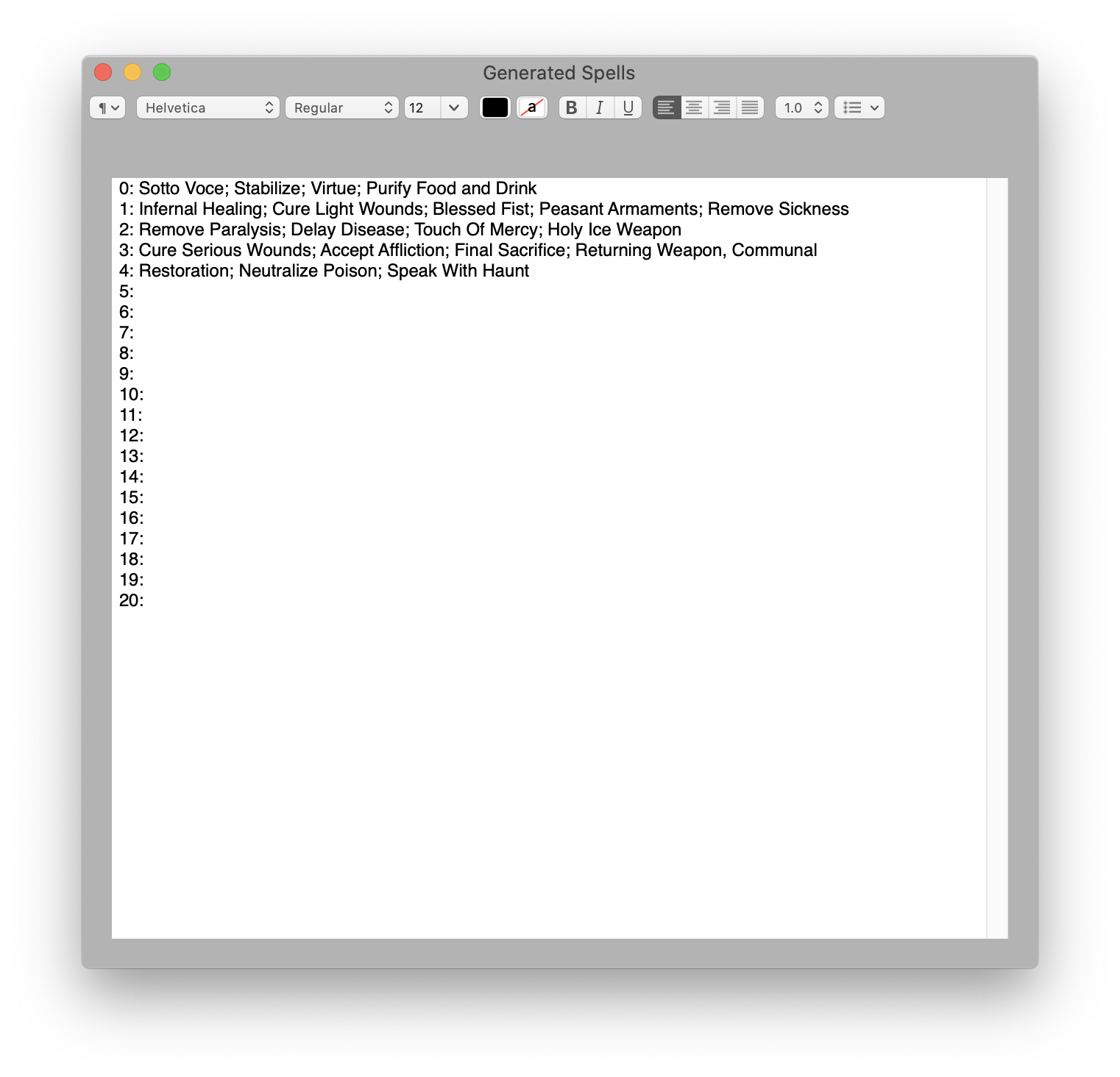 The top popup menu is the method generation. It is one of the following

Important: Slot changes are not auto-saved. You must press Apply before selecting another slot or you will lose your changes.

The slider under Use Metamagic are the odds (1-100%) of one or more metamagic feats being applied to that slot.

What metamagic feats that could be applied are in the list underneath. Do note, only sensical metamagic combinations with respect to a spell are allowed. For example a maximised Alarm spell cannot happen. The list allows multiple selection using the ⌘ key. Avoid too many selections per slot, it can stall SpellList.

*The reach feat has been split into three different feats. Reach_1 increases spell range by one step, reach_2 by two steps and reach_3 by three steps.

You may notice Heighten is not present. It is a complicated feat to apply and will come in a future version.

There are sixty other metagmagic feats that I may support. They are all difficult to code for and I will roll them out gradually. 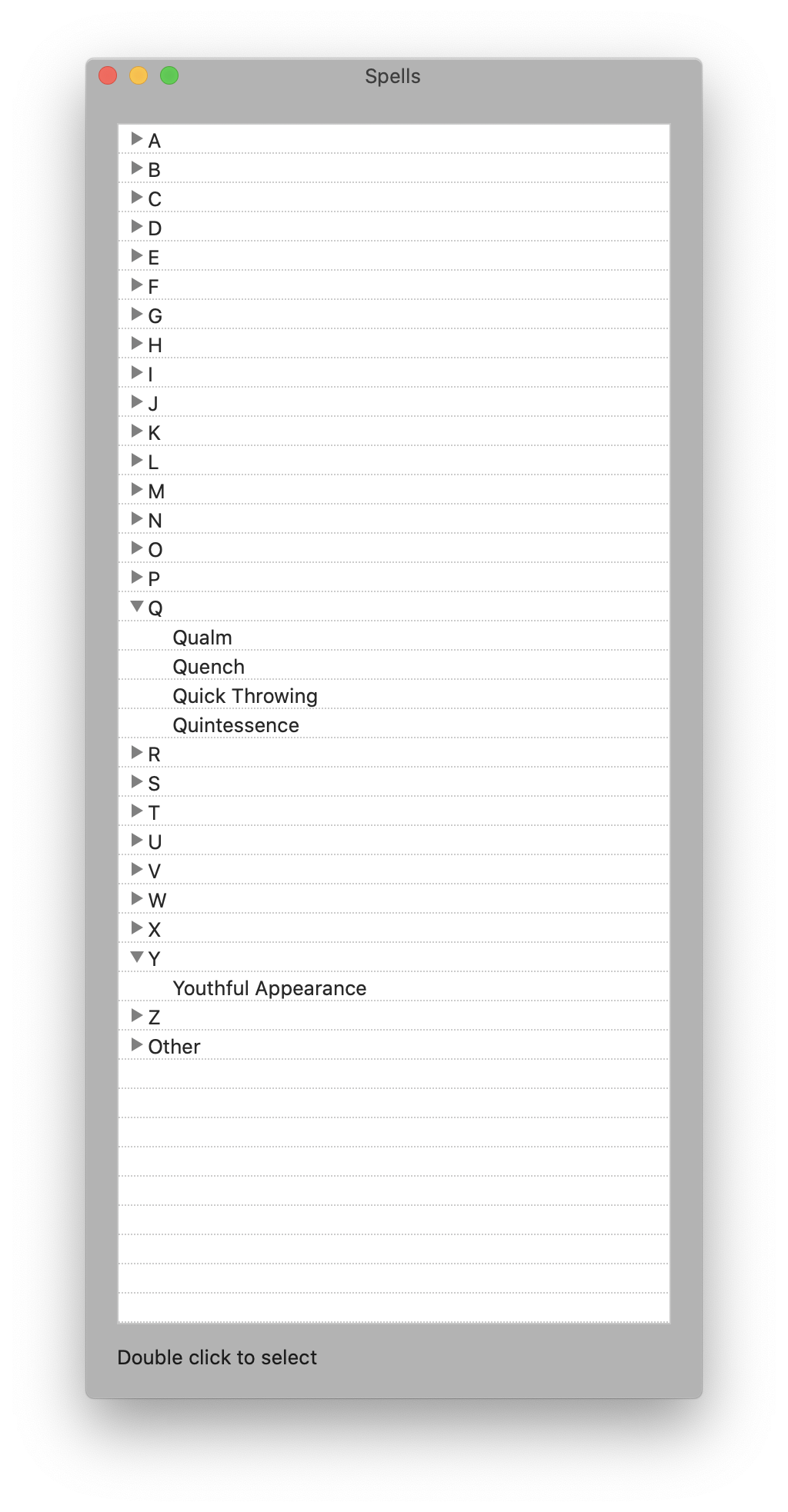 Only used by the Spell Generator.

The Query Select window background colour is the same as its associated window. In this case it is associated with the Spell Generator window.

Text between [if] & [endif] will only be printed if [NNN] exists or is true. [if!] is the not version, text will be printed the condition does not exist or is false.

NNN is any of the above which has the Condition at end of its description.

The query parser has differences from version 1 of SpellList and copying queries from that version to version 2 may result in syntax errors.

Phrases can be bracketed. Example: 'name contains "A" & (school is abj | school is nec)'.


A phrase is usually one of the following forms:

Example
The saved phrase 'sl_wizard' query is 'is wizard'.
User creates a new query where they want all fire and cold wizard spells.
The query would be '(descriptor is fire | descriptor is cold) & #sl_wizard#'.

Name
Phrase format
name contains | does not contain | is equal to | is not equal to | begins with | ends with "string"
The " " are required.